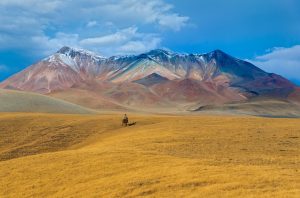 I was in London, and I went to a special exhibition about the Scythians at the British Museum.   (OK, I had to look them up too.)  The Scythians were nomadic people who lived in the grasslands and tundra of Central Asia from about the 9th to the 1st centuries BC.  Their domain extended from the Black Sea to Siberia.  About two thousand years after the Scythians, the area was conquered by Genghis Khan and made part of the Mongol Empire, which has much better name recognition today.

Both the Scythians and Mongols were masters of horseback riding and mounted archery, and this made them formidable both as hunters and as warriors.  The Scythians had a large empire, but they left no written legacy.  However, they were fabulously gifted goldsmiths, and the exhibition included a large collection of gold adornment – for people and horses – that is on loan from the Hermitage Museum in St. Petersburg.  It is extremely beautiful stuff.

The entrance to the exhibition was separated from the rest of the museum by a glass wall, with a glass door.  The first room was dimly lit, but even before I entered through the door, I could see a diorama of a vast expanse of grassland and mountains on the back wall of the first room.  I had done some research about the Scythians beforehand, so it made sense that the steppes of Central Asia would be featured in the exhibition.

Then I opened the glass door, and I heard the sound of wind from speakers in the room.  The sound sealed the deal.  Yes, the visual of the diorama helped set the mood and identify the place even before I had set foot in the first room, but it was the sound I heard as I entered that really put me there.  I felt small and alone in a vast expanse, and ready to consider the world from the Scythians’ perspective.

I have related this experience from the standpoint of being on the receiving end of it.  And I give kudos to the designers of the exhibition for making it so much more vivid by adding sound.  But it was also a reminder to me of how powerful the senses can be in establishing place and mood – and how we as voice actors can actively use our own sense memory as cues in performance.

Using What You Have

A great deal has been written about how an actor can “get into character,” and this blog is not intended to replace any of that.  But regardless of your view on what constitutes the “right” acting technique, it does occur to me that we have all experienced cues like the one used in the exhibition, that are useful because they are ours – they happened to us, and we therefore own them.  Wind over a vast expanse of grassland?  Probably most of the visitors to that exhibition have experienced that at some point in their lives.  I certainly have.  The exhibition curators got that, and gave us visitors an auditory cue to our own memory.  Brilliant.

And it is not just sound.  Our other senses – sight, touch, taste and smell – can also serve as cues to recall our own personal experience.  Sunlight filtered through thick fog, the cool smoothness of a marble sculpture, the taste of cask ale in a country pub, the smell of pine duff heated by the summer sun.

So, write them in a notebook, cover a wall with sticky notes, put them in a spreadsheet, or on scraps of paper thrown in a shoebox.  Or store them in your Mind Palace, if you are Sherlock.  Just hang on to them, because one day they might be useful.

2 thoughts on “Not an Acting Lesson”