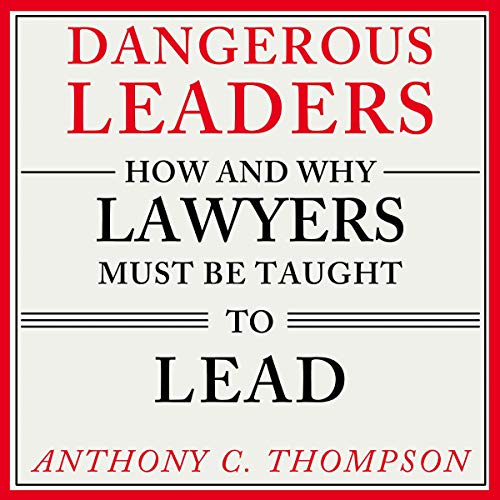 If you think that sounds like a good topic for a book, you are right.  I am pleased to announce the release of my latest audiobook, Dangerous Leaders: How and Why Lawyers Must be Taught to Lead, by Anthony C. Thompson.  The author is a Professor of Clinical Law at New York University, where he teaches courses related to criminal law, race and leadership, and civil litigation.  A member of NYU’s law faculty for over 20 years, he is also the founding director of NYU’s Center on Race, Inequality and the Law.  The book was originally published by Stanford University Press; the audiobook is from University Press Audiobooks, and it is available at the normal audiobook outlets.  A limited number of promo codes, redeemable on Audible, are available here.

Ripped from the Headlines

The author uses the stories of Flint, Bridgegate and Enron, as well as several other examples that are perhaps less widely known, to illustrate how the lawyers involved in each incident failed to lead when their guidance might have helped to avert the eventual outcome.  Indeed, some of these stories continue to surface in today’s news, even against the backdrop of the coronavirus pandemic: the national news marked the six-year anniversary of the Flint crisis a few weeks ago (it still not fully resolved), and the United States Supreme Court reversed the convictions of two Bridgegate defendants earlier this month.

Professor Thompson examines incidents involving malfeasance in government and in the private sector.  Elected officials normally receive the greatest amount of attention when the scandal involves government.  Indeed, since those officials rely on the consent of the governed to stay in office, that scrutiny makes sense.  And in the case of misdeeds in the private sector, the attention typically falls on the senior-most executives, who may have the most to gain financially.  But Thompson argues that in both the public and the private sector, there are inevitably lawyers at all levels in the chain of command that could and should ask questions as policy is discussed and formulated.  Yet in too many cases, they do not raise concerns.

This failure to intervene may be the result of a workplace culture that discourages dissent.  Such a culture can exist, for example, when elected officials believe they can use their power for personal enrichment, or when an aggressive corporate culture and (apparently) fabulous economic success make dissent difficult or impossible.  The pressure to “go with the flow” can be enormous. This book discusses both types of situations.

But that pressure must sometimes be resisted.  The problem, as Prof. Thompson sees it, is that while law schools provide training in the law, they do not explicitly teach leadership.  Yet leadership becomes “an inevitability and responsibility” for many lawyers after law school.  Given the depth and rigor of their legal education, lawyers are frequently given leadership roles in their professional life.  But without specific training in leadership skills and techniques, he maintains that the coming generation of likely leaders will enter their critical roles dangerously unprepared.

A Problem and a Solution

Beyond recounting these cautionary tales from the past, Thompson provides prescriptive solutions both for practicing lawyers, and for legal educators.  He proposes a fundamental rethinking of legal education that is based on intersectional leadership, so that lawyers will be better prepared to execute the types of roles that they may be asked to assume in their professional careers.  By embracing intersectional leadership, lawyer-leaders will be challenged to see the world through a different lens.  And that viewpoint can allow them to attain a form of inclusion and respect for other perspectives and experiences that will prove critical to maneuvering in a complex environment. Dangerous Leaders imparts invaluable tools and lessons to better prepare current and future generations of legal leaders.